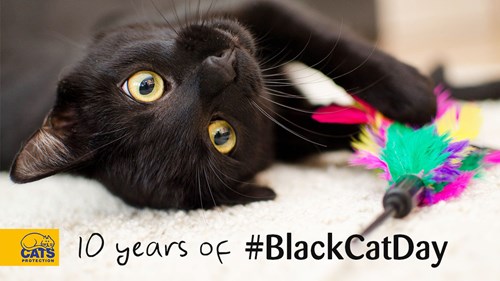 Get lucky with Payroll Giving on Black Cat Day

Cats Protection is the UK’s leading feline welfare charity. They help around 200,000 cats and kittens every year through their national network of around 230 volunteer-run branches and 37 centres.

On Tuesday 27th October they are celebrating the 10th anniversary of #BlackCatDay When the campaign was launched, statistics revealed that black and black-and-white cats took, on average, seven days longer to find a home compared to cats of other colours.

Years later, we’re still celebrating black cats in all their glory – although our campaigning has now paid off! Black and black-and-white cats now spend less time in our care than when we started promoting the campaign, resulting in thousands of happy cats and owners. Read more

donate now
COVID-19 - Charities Need Your Help Now - Click Here to find out more
We use cookies to ensure that we give you the best experience on our website. If you continue to use this site we will assume that you are happy with it.Ok